The Medial Collateral Ligament is the knee ligament located on the inner side of the knee joint. It starts at the femur bone and attaches to the tibia (shin) bone. A knee ligament injury is referred to as a sprain, and this knee injury can occur if the knee is twisted or flexed sideways (i.e.subjected to force from an opponent during sport or activity on bumpy ground).

Damage to a ligament is referred to as a sprain, and depending on the severity of the injury it is classified as first, second or third degree:

The are 2 classic causes:

1. In collision sports such as football when an opponent applies a force to the outside aspect of the leg.

2. The player tries to turn to the side, away from the planted leg . 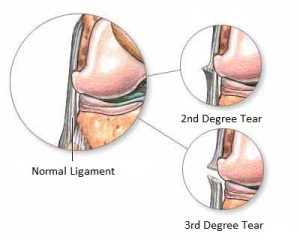 First degree: Pain when the tear is touched. Stressing the ligament is painful. Sport should stop for about 3 weeks.

Second degree: Pain is more severe when touched and when the ligament is stressed. There will usually be a swelling of the knee joint, but this may take 24 hours to appear.

Third degree: The knee joint is unstable and activity cannot be continued. There will be a bleed and an inflow of fluid into the knee joint but, because the capsule that surrounds the joint is also damaged, this fluid may leak out and swelling may not be evident.  There may be less pain than first and second degree as the nerve fibres have been torn also.

The PRICE protocol should be followed – Protection, Rest, Ice, Compression and Elevation (never apply ice directly to the skin). The knee should be rested in an elevated position and compression Bandage should be used to prevent excessive swelling.

For second degree sprains, the rehabilitation period will be between 6 and 8 weeks. Rehabilitation under the supervision of a Physiotherapist is desirable to prevent further damange with tape, arch support, bracing to prevent a recurrence of the injury, which can be common if a return to sport is attempted too early.   Evaluation and correction of weakness and biomechanics is crucial.

In the case of a third degree sprain, where the ligament is completely ruptured, the treatment of choice depends on the needs of the inividual.  Surgery to repair the structure is an option. The type of reconstruction used will depend on the exact site of the damage and the preference of the surgeon.  Conservative Rehabilitation using a Knee Brace can be very helpful and may achieve the same functional results as surgery. The brace supports the knee and takes the strain off the ligament during the early stage of injury, particularly when sleeping. The knee brace also provides protection during the later stages of rehabilitation.